NGAL (neutrophil gelatinase-associated lipocalin) is a small glycoprotein found in blood and urine. It is expressed by kidney tubular cells after kidney injury and it has been indicated as a promising biomarker of acute kidney injury. In addition, NGAL concentration is known to increase in severe infections.

New product. At Advanced ImmunoChemical, we provide several mouse and rabbit derived monoclonal antibodies specific to human NGAL, as well as a recombinant NGAL protein that can be used as a calibrator or standard in NGAL immunoassays as shown below: 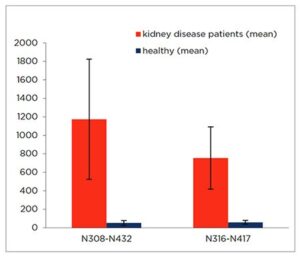 Mean concentrations of NGAL measured from patients diagnosed with a kidney disease and apparently healthy individuals.

NGAL concentration in patients with a kidney disease was several fold higher than in healthy individuals.

NGAL (neutrophil gelatinase-associated lipocalin, also known as Lipocalin-2) is a small glycoprotein that belongs to the lipocalin superfamily. It is found in neutrophil secondary granules, however, several cell types express NGAL in response to injuries (1). The function of NGAL is not fully understood, however, it has been shown to be involved in innate immunity response by binding to siderophores produced by bacteria. Siderophores carry iron needed by bacteria to grow and by limiting the available iron NGAL can limit bacterial growth (2).

NGAL can be detected in blood and urine in three different forms: a 25-kDa monomer, a 45-kDa disulphide-linked homodimer and a 135-kDa heterodimer. The heteromeric form consists of covalently bound NGAL and matrix metalloproteinase 9 (MMP-9) (3).

NGAL has been indicated as a promising marker of acute kidney injury (AKI) (4). AKI causes an abrupt decline in renal function and it is defined by increase in serum creatinine within 48 hours or by decrease in urine output in six hours (5). NGAL is produced by kidney tubular epithelial cells and its levels rapidly increase after tubular damage. NGAL levels have been shown to increase in just two hours after the injury (6) and thus it would allow for a faster detection of AKI than serum creatinine (7,8). The use of NGAL along with a panel of other renal biomarkers could improve the early detection of AKI. In Europe, a few NGAL tests have been approved for clinical use.

NGAL may also be involved in the pathophysiological process of chronic kidney diseases (CKD). NGAL levels correlate with severity of renal impairment (9). Thus, NGAL is a direct marker of structural kidney injury and could serve to identify early renal damage or predict renal disease progression.

In addition to its promising role in the detection of AKI, NGAL has been indicated as a nonspecific marker of acute infections — similarly to that of C-reactive protein and PCT, for example (10). The main form of NGAL that correlates with the inflammation appears to be the homodimeric NGAL. Homodimeric NGAL is the form primarily found in neutrophil granules.

We provide several mouse and rabbit derived monoclonal antibodies specific to human NGAL and suitable for assay development. In addition, we offer recombinant NGAL that can be used as a calibrator or standard in NGAL immunoassays, or for biochemical and immunochemical studies of NGAL.

All posts by Advanced ImmunoChemical ›

All products manufactured according to ISO:9001:2015 standards.
Click to view certificate.